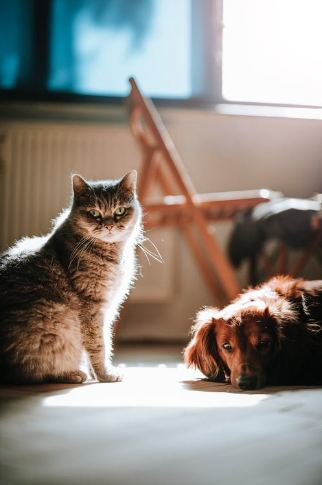 Having a pet around can make any person pleased and comforted, just by spending some time with them. Pets have the natural character to remove stress and warm the heart of their owners. So most people consider getting a pet as an added member of their family to fit their lives around them.

Others would prefer a four-legged like dogs or cats, while some prefer an eight-legged creature like spiders as pets, but in fact, it doesn’t matter what kind of pet a person can have to get much love from these animals.

This quarantine season, there is an update about the most popular pets in the United Kingdom. And there is actually a large increase of pets estimated to be around fifty-one million in population. So to check what kind of pet tops every house of a typical British family, just continue reading down below.

Do you know anyone who actually hates dogs? Well, in the UK, with over sixty-six million of the British population, twelve million of them have a pet dog in their house. And the most popular dog breed for British owners is a Labrador Retriever. Dogs as pets sit firmly at the top of the throne as the most popular pet in the United Kingdom.

This is no surprise that cats are one of the most popular pets in the UK, and perhaps in other countries too. These furry felines have dominated most of the UK regions since the middle ages, and even today, they occupy most British homes with their warmth.

You might be wondering how these scaly friends ended up at the top of the list. Well, for the British, this is not some rare legend. At the start of the twenty-first century, indoor fish had gained popularity in the United Kingdom, that they were the top-notch popular pets before the dogs came in.

Outdoor fishies are also as popular as indoor ones. The only difference they had was the additional space requirement and rather expensive maintenance than indoor fish. Still, these calmed and peace-loving pets never failed to touch the hearts of every British family.

The feathery pets that the British love so much. Whether they are a canary, budgerie, or parrot, you will never fail to see a bird pet in some houses in the UK. Birds as pets for every household consist of more than a million in the country.

You might see this as farm animals, but they are popular pets in the UK. Once you have a hen by your house, you already have a pet and all the fresh eggs you want. They also consist of over a million for every British household.

These cuddly and furry friends are common to any British family, especially with the kids. Rabbits consist of almost a million on each house in the UK. And if you have a pair of them, they reproduce as fast as you can imagine.

Another fluffy friend, the Guinea Pig, just recently entered the list of most popular pets in the UK. They started to gain popularity at the start of the quarantine days, where these pets could stay for long hours with their owners inside the house. These Guinea Pigs looked like a cousin of hamsters, only bigger in size. And they comprise at least eight hundred thousand in population in the country.

These adorable rodents have undoubtedly filled British houses for a long time already. They are typical indoor pets in the United Kingdom that have fabulous cages or glass tanka along with hamster toys and wheels that every owner will surely love to watch. The most popular breed in the UK for a hamster is either the Syrian or the Golden Hamster.

Centuries ago, horses, including ponies, were the top most popular pets in England, especially in the Middle Ages, where horses were used as a means of transportation. Even today, with state-of-the-art transportation vehicles, the British still have them in their houses not for pulling any carriage but as a loving pet. They consist of at least five hundred thousand in every household in the United Kingdom.