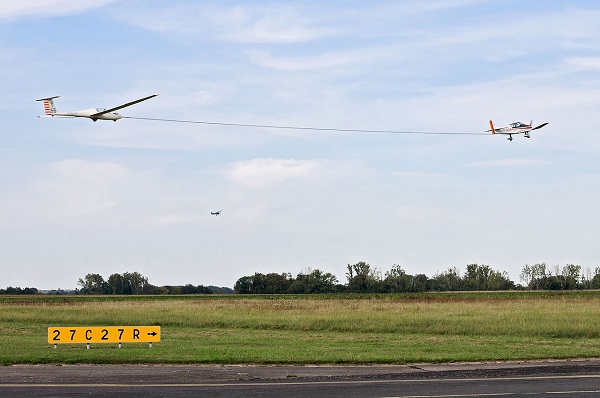 To perform aerotowing, a powered aircraft has to be attached to a glider using a tow rope. Motor gliders or a single-engine light aircraft are typically used in this exhibition. After being connected to each other, the tow plane then takes the glider up to the sky and in a preferred height and location that is requested by the pilot, and this is where the glider pilot will release the tow-rope. To avoid any sudden loads and make sure that the glider or the tow plane’s airframe is not damaged, a weak link is often fitted to the rope. When the weak link is put under extreme loads, it will fail before any part of the plane or glider fails. However, there is a slight chance that the weak link can break even at a low altitude. That is why pilots always have a plan for this happening before they launch.

In aerotowing, the glider pilot has to make sure that he keeps the glider behind the tow-plane either in a high tow position, which is above the wake, and in a low tow position, which is just below the wake from the tow-plane. There is one rare aerotow exhibition where a tow-plane is attached to two gliders using a long rope for the low tow and a short rope in the high-towed glider.