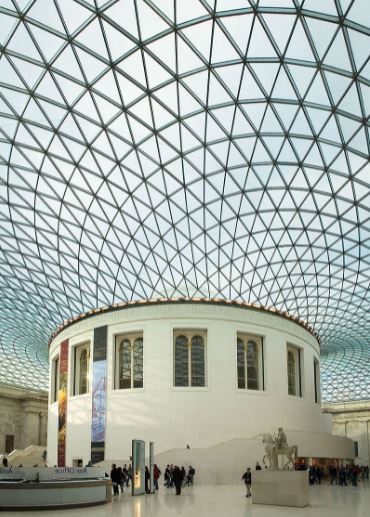 The United Kingdom has been a playground of architectural flare for generations.

It’s a good idea to glance up if you want to see the best instances of the capital’s design brilliance – not only at the city’s skyscrapers but also at the different styles of ceilings, which will frequently leave you even more astounded.

Some of the most extraordinary instances of artwork in the United Kingdom can be found just above your head, from mind-bogglingly detailed marble work to gallery-worthy paintings.

These are the gorgeous ceiling designs worth a bit of stiff neck:

The Chapel of Fitzrovia was once part of the now-demolished Middlesex Hospital, has a lot more to offer than your average hospital prayer room.

John Loughborough Pearson designed the Neo-Gothic structure, which began building in 1891. It was completed in 1929 by his son Frank as a tribute to Major Ross MP, the hospital’s former Chairman of the Board of Governors. 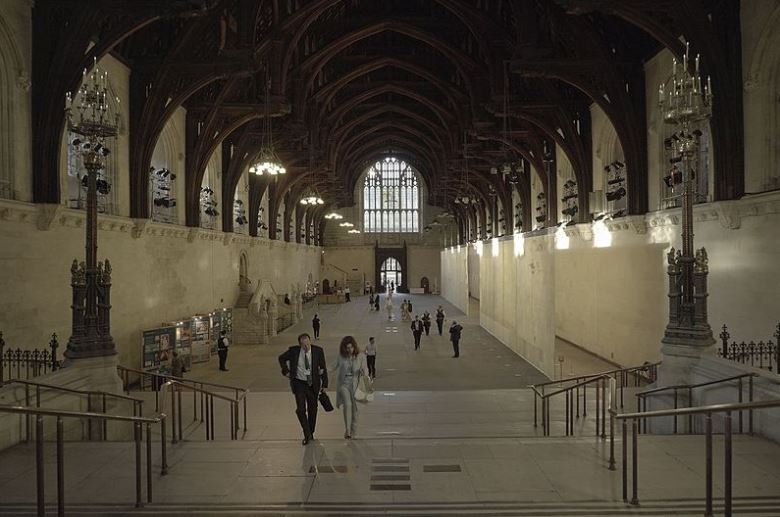 Westminster Hall, the only surviving portion of the historic Palace of Westminster, looks distinct from Charles Barry’s 19th-century Houses of Parliament, yet it is one of London’s oldest structures.

Westminster Hall has the most extensive unsupported roof in the United Kingdom, with portions dating 1087. It was constructed during William II’s reign, and most of it still dates from the 1390s.

Look up to see the wooden angels on the beam. Each one has a distinct appearance!

Around 50 churches in London are tucked around corners and often forgotten behind skyscrapers. A visit to St. Mary Aldermary on Bow Lane, EC4, should be on everyone’s bucket list.

Its fan-vaulted ceiling is one of London’s most astonishing ‘hidden gems,’ so unexpected in such a little parish church. Another surprise is that the church has its coffeeshop, ‘host,’ which is open from Monday to Friday, 7.15 am-4.45 pm.

Kenwood has a unique history and a fantastic art collection, including Old Masters like Rembrandt and Vermeer. 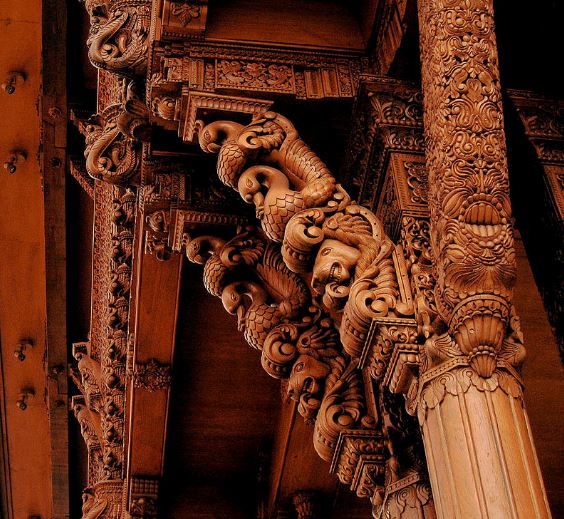 The BAPS Shri Swaminarayan Mandir, completed in 1995, is the largest Hindu temple outside India. Inside and out, it’s encrusted with incomprehensibly intricate artwork carved by hand by artisans from Italian Carrara and Bulgarian limestone. Naturally, the gleaming white ceilings are no exception. 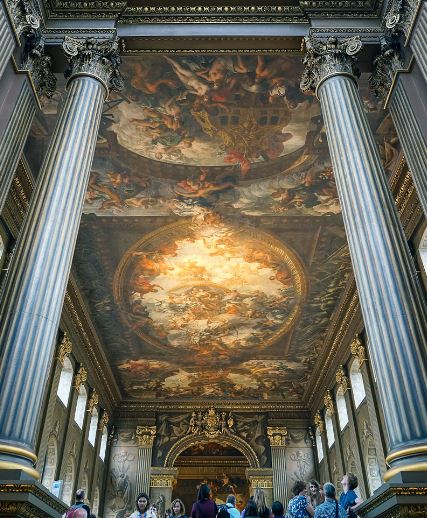 When it comes to London’s most impressive ceilings, the Old Royal Navy College has to be at the top of the list. The Painted Hall’s ceiling is a massive 40,000 square feet, completely covered with a painted design by an English painter James Thornhill (of St Paul’s Cathedral fame). The picture depicts 200 characters involved in a complex narrative, alluding to the country’s political transformation, which coincided with the formation of the United Kingdom. 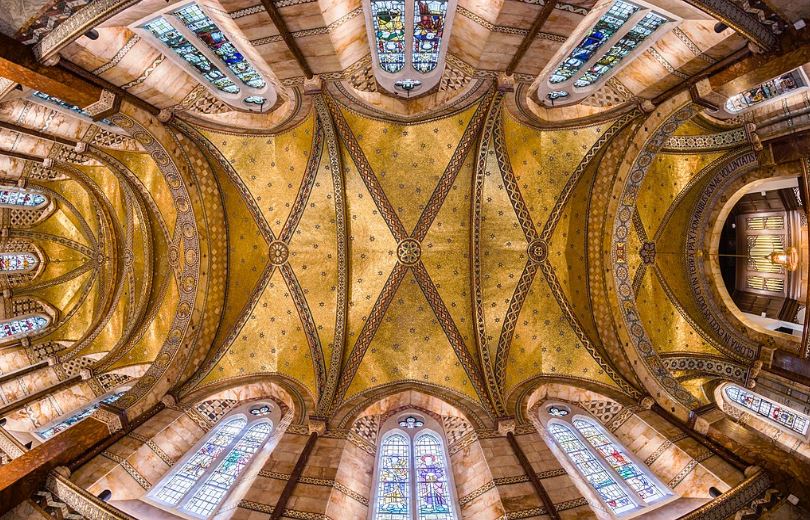 This list isn’t entirely comprised of golden oldies. The British Museum’s Queen Elizabeth II Great Court opened in 2000, coinciding with the millennium celebrations. It is Europe’s largest covered plaza, covering over 3,500m2, and what surrounds it is magnificent. The center Reading Room’s triangulated glass roof breaks forth, undulating as it fans out to the court’s outer walls.

While Buckingham Palace isn’t short on luxury, and the Blue Drawing Room is unquestionably one of the palace’s 775 chambers. The blue flock wallpaper that lends it its name (a later addition made by Queen Mary) and an elegantly molded ceiling were both designed by John Nash. The room held the wedding reception for Prince William and the Duchess of Cambridge in 2011. 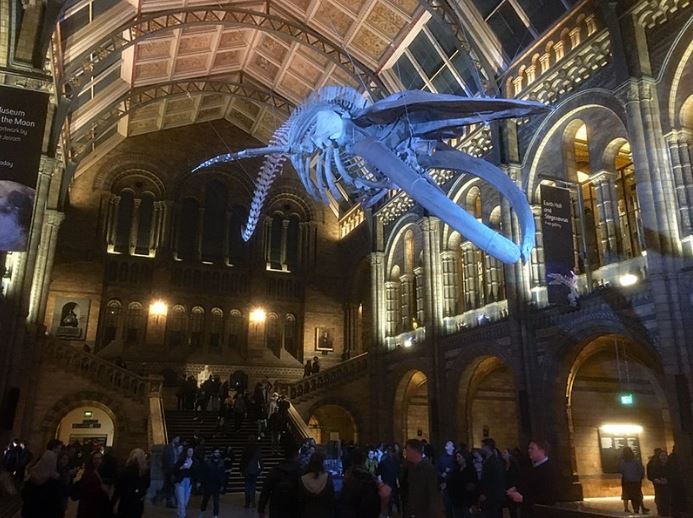 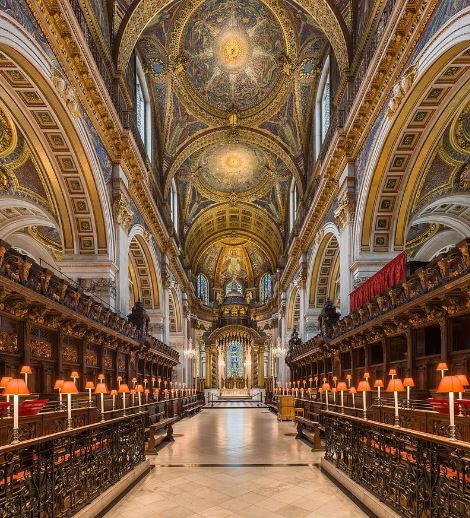 The dome of Sir Christopher Wren’s church is one of the most famous sights in the capital from the outside. The interior, decorated in monochromatic paintings depicting scenes from St Paul’s life by artist James Thornhill is possibly even more awe-inspiring. To see them up close, go to the Whispering Gallery in the dome.

The Great Hall at Hampton Court 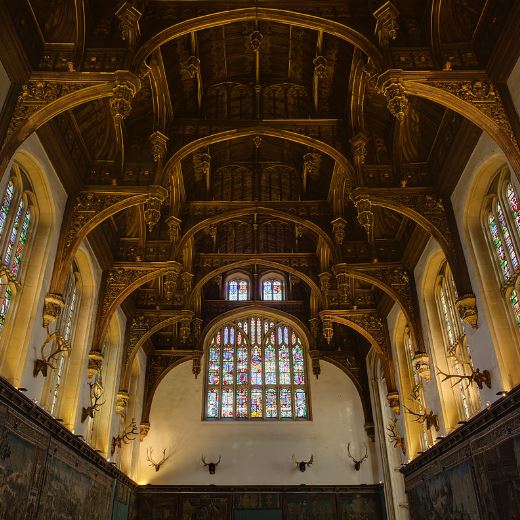 The Great Hall is the palace’s largest room, measuring 108 feet long by 40 feet broad and boasting a lavishly adorned hammer-beam roof that soars to a height of 60 feet. Majestic Brussels tapestries from the early 16th century depicting the biblical tale of Abraham adorn the walls.

Beautiful stained-glass windows depicting numerous emblems and an artistically carved minstrel’s gallery grace the space. King Henry sat at a table on an elevated dais in the Great Hall, where he would have a big meal over several hours. 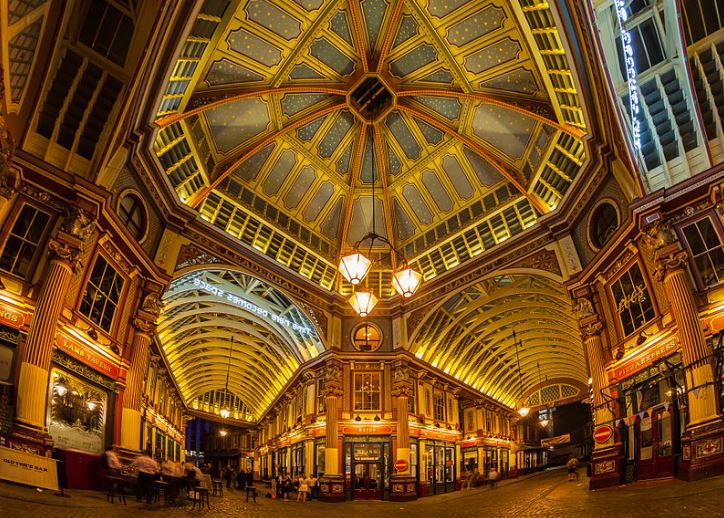 From the luxurious to the more down-to-earth, there’s something for everyone. Pause your shopping at Leadenhall Market to see the arcade’s arched glass ceiling. Take the initiative of looking up at the central intersection, which is also blue and adorned with stars. Fun fact: Diagon Alley in the Harry Potter films were filmed in the market.

The Royal Society, founded in 1662, has been located at Carlton Terrace since 1967. The President’s Staircase has this magnificent ceiling made of carved wood with mother-of-pearl inlay.

The lavish interiors date from around 1890, when the property was home to Charles Henry Sanford, an American-born businessman.

Between 1748 to 1790, Horace Walpole (brother of the first Prime Minister) built a holiday house. Strawberry Hill House is one of the best and earliest instances of Gothic revival architecture, and it’s so bizarre that it’s been given its style: Strawberry Hill Gothic. 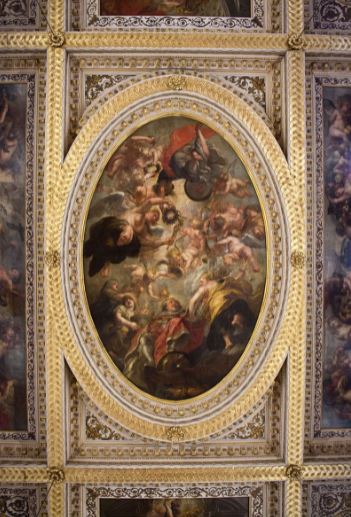 In 1636, the canvases were hung in the hall. The Apotheosis of James I, The Union of the Crowns, and The Peaceful Reign of James I are depicted on the three main canvasses.

Charles I, who reigned from 1629 to 1630, has commissioned the ceiling. Before his death on a scaffold outside the Banqueting Hall in 1649, it was one of the King’s last sights.